Sneak Peek at the 2009 Showtime House

Metropolitan Home and Showtime have teamed up again this year, following the success of last year’s Showtime House with even bigger and better plans for this year’s installation. This time, 14 renowned designers will transform not one, but two New York penthouses into the ultimate multimedia showhouse with rooms inspired by Showtime's 6 Original Series; Californication, Dexter, Nurse Jackie, The Tudors, United States of Tara and Weeds. Each piece of the rooms, from flooring to countertops to furniture to window treatments, will be inspired by elements of the 6 shows. 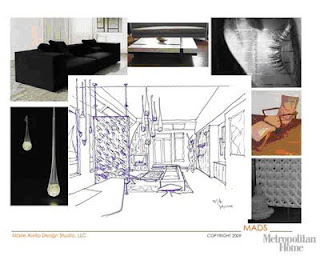 One local blogger gave the public a sneak peek at the designer’s sketches and intended designs straight from Metropolitan Home. While last year’s centerpiece muse was Dexter, this year’s seems to be Hank Moody (character played by David Duchovny) of Californication. The hit show fuses Hank’s hometown of NYC with his latest place of residence, , and all the sinful temptations that come with it. With Hank, , sex, and bad habits as their inspiration, designers Markus Dochantschi, Susannah Drake, and Joannah Kornak for Holly Hunt each interpreted the sinful plotline as fuel for their stunning spaces.

For Dexter, who’s been leading a much different and conflicted lifestyle in recent plotlines of the show, designer and former TV Producer Marie Aiello created a Foyer/Gallery, Living Room, Dining Room, Kitchen and Terrace to capture the many sides of this complex character played by Michael C. Hall. Whether Dexter is passing through the foyer, hanging out in the living room with the kids, or thoughtfully cutting vegetables on the kitchen countertops with a newly sharpened knife, Marie Aiello has designed a space to accommodate the many sides of Dexter. “I want my space to speak to Dexter’s conflict and inner torment but be rendered in not so obvious ways. Each room is sophisticated and seductive but not too pretty,” says Aiello.

From Showtime’s Press Release: Building on last year's success, Showtime is incredibly excited to once again partner with Metropolitan Home for this one-of-a-kind experience," says Len Fogge, Showtime Executive VP, Creative & Marketing. "The combination of the latest in innovative modern design and Showtime's cutting-edge programming forms an organic environment where consumers can physically experience and explore the Showtime brand. The house allows visitors to get a deeper insight into the characters and storylines that solidify Showtime as the premiere destination for compelling programming.”

Posted by CAESARSTONEUS at 3:42 AM

Is there anybody want to travel Tibet? Hey there, I plan to Tibet Travel next month but I don't know anything about Tibet tour. I want by Tibet Train into Tibet, But I need a Tibet Travel Permit. If you're interested please let me know your tibet travel package and tibet tour package~

Promote Your Page Too